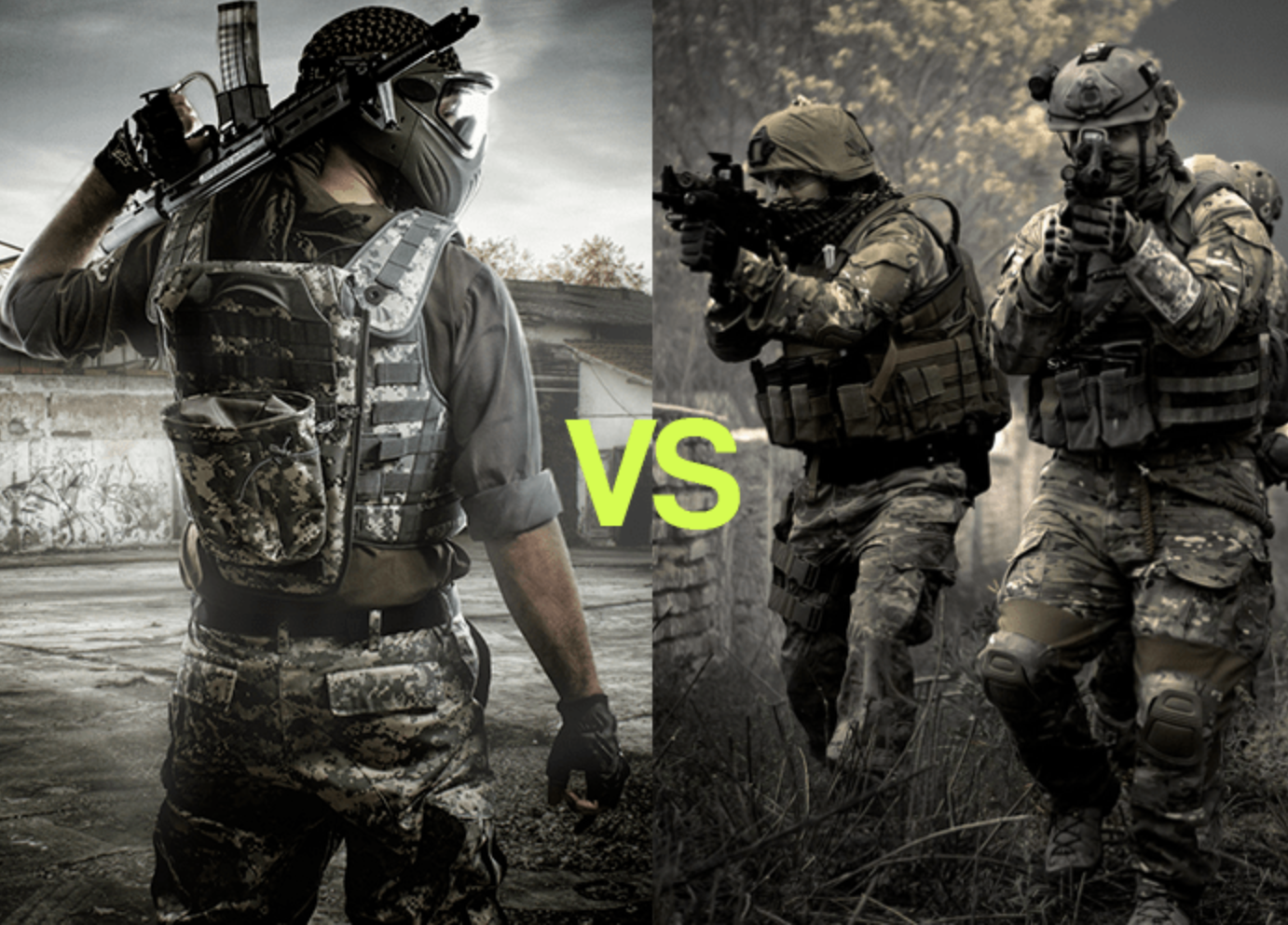 The sports of Airsoft and Paintball are often confused with one another by the general public. Although they have many similarities, there are differences between them that set them apart from each other. This article will highlight some of those differences to help you get a better understanding of both games.

1) Airsoft is a sport similar to paintball, except instead of paintballs the projectiles are plastic BBs.

2) Airsoft guns fire 6mm spherical plastic projectiles (some gas/spring powered airsoft guns use 8mm steel BBs), which are very small – usually 5.95-6.00mm in diameter and weigh between 0.12g and 0.48g each (most common weight for stock airsoft AEGs is 0.20g).

3) Paintball guns shoot 10mm spherical gelatin capsules filled with a propellant (normally CO2 or compressed air). The massive size difference between the projectile fired by an airsoft gun vs that of a paintball allows for greater accuracy at greater distances; although range will vary depending on barrel length, hop-up settings, temperature, wind, etc.

4) Airsoft guns are generally replica firearms modeled after real-steel designs (examples include the M16 rifle series and G36C assault carbine). They are designed to be as realistic as possible in both appearance and operation – which means that many of them tend to have an extremely high rate of fire (ROF), muzzle velocity (MV), and can easily accept accessories like optics / red-dot sights and flashlights. This is also why they typically make a lot more noise when fired due to the use of standard AEG gearboxes with stock motors or upgraded 3rd party high torque motors. These combinations result in some fairly impressive performance capabilities – but it comes with a cost – a large amount of noise, and a lot of wear and tears on the internals.

5) Paintball guns can come in a variety of shapes and sizes. They range from sniper-grade paintball rifles to pump / c02 powered semi-automatic markers designed for speedball games (and everything in between), but they are all designed around one single principle: shoot spherical gelatin capsules filled with CO2 or compressed air at high speeds (~200 feet per second). This requires them to be very lightweight, accept only high-end paintballs (not marbles – standard grade is what you want), use special lubricants inside the barrel(s) to ensure optimal operation over time, etc… The same holds true for how the paintballs are treated. Some markers will fire standard paintballs (cheap), while others will require special low-impact balls (expensive).

6) Airsoft guns aren’t just limited to just replicas of real-steel firearms – they also come in all sorts of forms, including spring-powered rifles much like you’d see in old school cowboy action shooting, bolt action sniper rifles much like those used by the military, and law enforcement for long-range engagements, semi / full auto submachine guns/assault rifles using high torque electric motors, replica gas blowback pistols modeled after the likes of Glock or Tokyo Marui designs… And even some oddball stuff like shotgun shells that launch BBs, grenades that shoot foam darts… you name it! They are all designed to replicate their real-steel counterparts as closely as possible in both operation and performance.

7) Paintball is a MUCH cheaper alternative to airsoft, but the guns are much more expensive than an airsoft counterpart. You can purchase a paintball gun for anywhere from $50-$2000+, while you can purchase an airsoft gun for about half that cost. One of our M4 carbine spring-powered Airsoft guns costs only $38.99, while one similar replica by G&G will cost you close to four times that amount. The simplest reason why? They are made completely different! There are no moving internal parts present inside an Airsoft gun – no gearboxes, triggers, sears… nothing! Only springs of various strengths are used inside an Airsoft gun to propel the BB, while all of the mechanicals are present inside of a paintball gun.

8) The body parts of an airsoft gun can last quite some time if properly maintained and handled. Unlike real steel firearms where you have things like barrels that wear down over time or multiple moving parts that can seize or break, Airsoft guns are more known for stripping screws, breaking light-duty springs, gearbox shells not being able to hold onto the internals… issues like this plague most entry-level Airsoft guns because they are simply not designed to handle much abuse at all. This is why it’s very important to purchase quality products made by reputable companies – as you don’t want to risk damaging your gun during normal use.

Paintball markers on the other hand are much more durable in comparison. Just about all of them are made with high-grade aluminum bodies that can take quite a beating, even in adverse weather conditions. The internal parts – just like Airsoft guns – are extremely simple in design and construction which is why they can last so long under hard play situations (like woodsball or scenario games). That’s not to say ALL paintball guns will operate flawlessly for 10 years, but most of them come close with proper maintenance and upkeep procedures applied after each game you attend.

9) When it comes to accuracy… both provide their own unique advantages over the other when comparing equal spec’d markers. With average factory spec paintballs (not the expensive tournament-grade ones), airsoft is capable of shooting at about 100 feet accurately before you start seeing any drop off in trajectory. The same goes for our M4 carbine airsoft gun – with .25g or heavier 6mm BBs, it can shoot accurately out to about 100 feet (about 30 meters). Accuracy drops quite a bit at range after that point – especially if you’re talking about spring-powered rifles that are often up to 200 FPS slower than their gas / electric-powered counterparts. Paintball guns on the other hand are just as accurate when firing high-grade paintballs, but once again… your accuracy will suffer if you start using lower quality balls instead of the higher grade ones. Even the best paintballs aren’t cheap, so you really have to play with what you can afford which can limit how accurate your shots are.

10) The majority of Airsoft guns are designed for CQB (Close Quarter Battle), similar to pistols or submachine guns. With the compact size, they are perfect for indoor or outdoor urban combat situations where maneuvering side-to-side will be necessary. They are also incredibly useful when clearing out tight areas, such as crawl spaces and rooms with large pieces of furniture – places where a standard length rifle just wouldn’t work if it got stuck on something! Paintball markers offer their own unique advantages too though. You see… most players prefer using larger caliber rifles/markers that shoot .68 caliber paintballs (or other sizes like .50 and .90). The larger size and shape of these projectiles allow them to travel much further – up to 100 feet or more accurately before losing velocity. This makes woodsball games a lot easier as well, as you can take out opposing players from incredibly long distances if you’re skilled enough to make your shots count.

11) Both require some type of maintenance, but it’s Airsoft guns that really need the most work after every game played. A majority of airsoft weapons are made with plastic internal parts which means they can easily break if not properly maintained each time you use it. Not only that, but the internal components have a small spring/piston that has an even smaller seal on it which can wear down and cause problems after repeated use. Replacing these parts is an inexpensive way to keep your gun working well, but it does take time and effort to do so. Paintball guns on the other hand are much easier to maintain as there’s very little that can go wrong with them! Most markers come with a self-lubricating system (and even if they don’t… you can easily add one yourself) so there isn’t any need for oiling up internal components. The only thing important with paintball guns is making sure you clean out all debris or dirt from the barrel after every game – otherwise accuracy will suffer greatly.

12) Both Airsoft and paintball guns have their own sets of safety rules that players must follow before playing a game. With Airsoft, you can’t shoot anyone within 100 feet of yourself and you also have to keep the gun pointed in a safe direction at all times when not shooting it. Not only that, but Airsoft guns need to be equipped with some sort of orange tip on the front – required by law for this type of realistic sport replica. Paintball markers on the other hand aren’t nearly as strict when it comes to safety (although having goggles is still recommended) since players are encouraged to take shots from any angle they can make… even if their opponents don’t have any protective gear on at all! As long as you don’t aim directly at someone’s head or torso (which both types of paintballs are good for hitting at any distance) you can get away with shooting people in the back, legs, or anywhere else that’s unprotected. Just remember – safety comes first in every sport.